Fixing It in the Whelping Box 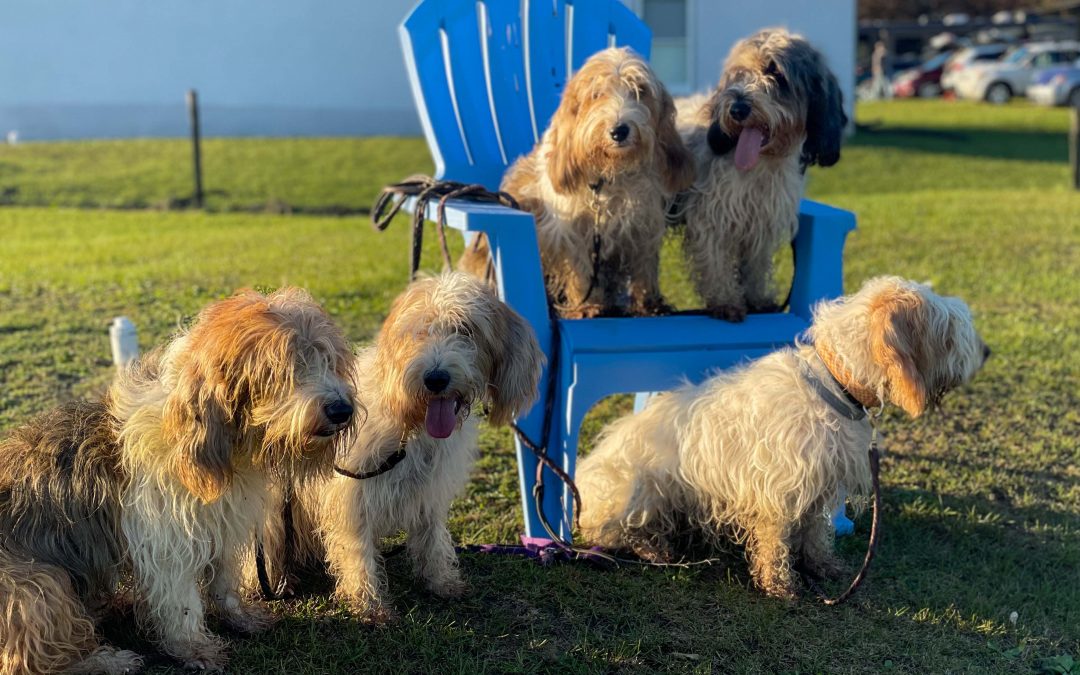 There’s an old saying in dog shows, “Fix it in the whelping box, not the tack box”. I found myself thinking of a variation of this phrase at a hunt test this weekend, as handlers expressed frustration with their dogs’ problem behaviors on the hunt field.  While training based solutions could certainly improve some of the common challenges that present on the hunt field, it’s also clear to me that many of these behaviors have a hereditary component that shouldn’t be overlooked.

The first problem that comes to mind is a really common one in PBGVs- babbling. For those unfamiliar with hunting with scent hounds, the way that the hunter knows that the dogs are on a fresh rabbit trail is because the dogs “give voice”, barking and howling until they lose the hot line. This is extremely useful because rabbits live in thick cover where visibility is often limited. Voicing lets the handler know where the dogs are and in which direction the rabbit is heading.  At a hunt test this is needed for a qualifying score, but in a real hunt this would allow the hunter to safely shoot the rabbit without risking injury to hounds. Most PBGVs will open on fresh trails, the challenge is that many of them start barking the minute the leash comes off and don’t stop for the entire hour of the hunt. This makes it nearly impossible to accurately assess when the dogs are on a rabbit, but also tends to frustrate the pack mates of the babbling dog because they don’t know when to honor the babbler.

I suspect a widespread misunderstanding of the phrase “good voice freely and purposefully used” in the breed standard has contributed to this problem. The “purposefully” part was added after the start of the PBGVCA Hunt Program to try to clarify that more is not better where barking is concerned. All scent hounds have a tendency to bark when aroused, which has been selected for by hunters for centuries.  Barking all the time is a nuisance behavior on the hunt field and in a household, not a desirable breed characteristic.  This would also mean that a PBGV who barks in the show ring in the absence of rabbits is not “meeting the standard” and should not be rewarded for this behavior. Sadly, it’s common practice for professional handlers to train a subtle speak cue to dogs being campaigned as this can be a way to catch a judge’s attention.

Another area of concern is biddability, which would be scored as Cooperation with Handler on the hunt field. There’s a common misconception that PBGVs should never be allowed off leash without a secure fence and many handlers opt to use (and I would argue, overuse) GPS tracking collars even within a fenced Beagle club.  Here’s the thing- the founders of our breed had neither fences nor tracking collars, if the dogs couldn’t work off leash they weren’t a useful hunting dog and were not bred. I understand that safe hunting grounds are harder to find in the modern era, but I also think that a lot more selection pressure could be placed on breeding for dogs who check in with the handler and recall readily. To learn more about a PBGV pack that still hunts in open country in suburban Philadelphia, visit www.skycastlefrenchhounds.com.

One final characteristic that seems to have a genetic component is willingness to enter cover without begging, pleading, or bribery from the handler. Rabbits don’t live on paths, they live in the undergrowth. Willingness to look in the places they live is important. Correct coat texture makes it safer and easier for dogs to go into the brush, but a certain tolerance for discomfort is also needed.  I will add that I have seen dogs develop an aversion to cover after being injured because their protective coat had been stripped away for the show ring.

Ok, so here’s the hard part- if the above traits matter to at least a portion of the PBGV community and are a critical part of our breed’s history shouldn’t they factor into breeding decisions?  As a long time PBGV breeder I know that our gene pool is tiny (and getting smaller all the time) and that there is no perfect dog. I also know that traits that are ignored are unlikely to improve. In a perfect world, I would not breed to a dog without having my hands on him and seeing him on the hunt field but sometimes it’s not possible to do both. If a dog hasn’t hunted himself, what about his parents, siblings, and offspring?  This could also be useful information that should probably play into breeding choices.  More information is always better than less, even when it can feel like you are on overload. Breeding is always about choices and compromise, but when we limit our knowledge of a particular dog or pedigree to their record in the show ring, we lose an important part of our breed. By supporting and encouraging breeding for hunting qualities as well as outward appearance we can only make our breed stronger and more diverse.