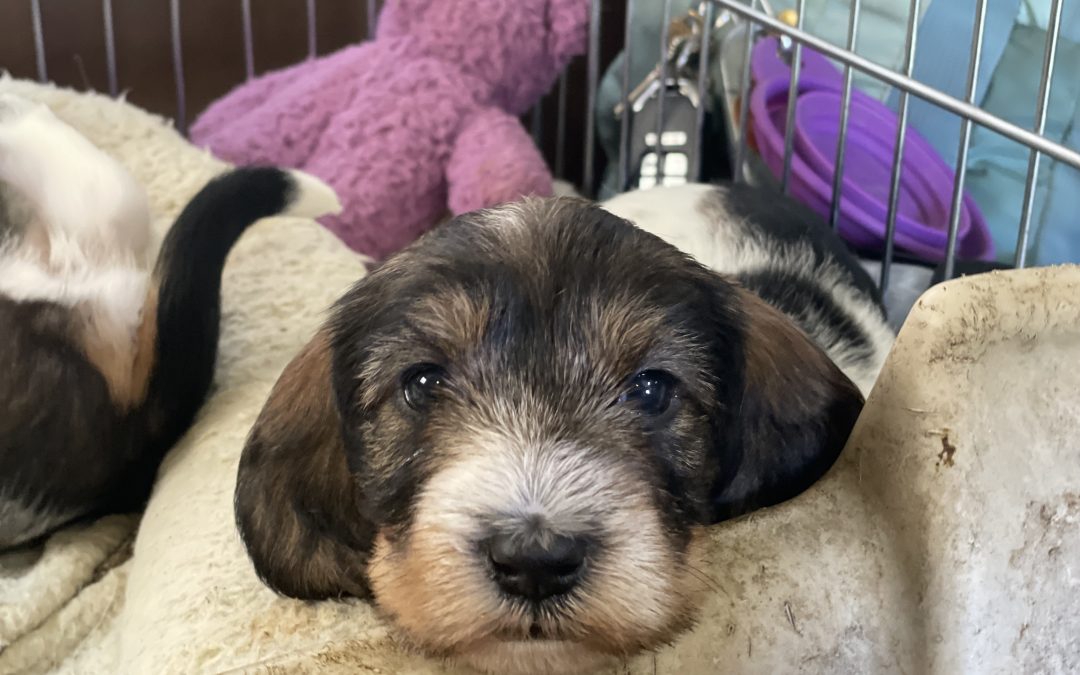 This is a follow up to my last post, which includes a video of a temperament evaluation on an 8 week old PBGV puppy. Today, I’m sharing a video of a Working English Cocker Spaniel puppy doing the same evaluation. Like the puppy in my last post, 8 week old Pumpkin shows some really nice qualities and has a lot of potential, but the breed differences between the two videos are interesting to see.

As purebred dogs have become more of a minority in our society, I think it can be easy to lose sight of why we have so many different breeds in the first place. The old “nature vs. nurture” conversation definitely applies when looking at dogs or puppies, but in reality I think it’s important to realize that every living thing is a product of both.  Care, environment, nutrition, enrichment, and other factors absolutely make a difference in how well a puppy reaches its potential, but that doesn’t mean that every puppy is an identical blank slate. If there weren’t differences between breeds in personality, trainability, and just how they see the world, we simply wouldn’t have all of the breeds that we do- there would be no need. In a world where the vast majority of dogs are either randomly bred mixed breeds or something-doodles, it seems more important than ever for preservation breeders to embrace and select for the temperament traits that make our breeds what they are.

Like the PBGV in the last post, the evaluation shows a puppy with a great deal of potential for dog sports. Many of her reactions to the test items were similar, but there were big differences in how she moved through the space and her general approach to the test. The PBGV puppy engaged readily, but remained fairly calm and walked or trotted most of the time. In contrast, the cocker puppy is frequently running and generally moving much more quickly. In fact, the video itself was a full 2 minutes shorter even though the same evaluation was done. This video also shows a highly social puppy, which is very typical of her breed. She displays nice confidence with novel stimulation in the environment.

With each litter I have opted to share a single video, but I had the privilege of performing this evaluation on all of the puppies in both litters.  Many thanks to Cheryl and Kim for allowing me to do this.  All of the puppies tested displayed very nice, stable temperaments. The differences between puppies were often subtle but did provide information about what type of placement would be best. In the PBGV litter, any of the puppies would have done well in an average pet home, but some showed more of the confidence and sociability that would point to a competition sports dog. In the cocker litter, the puppies were overall more active and “busier”. As expected, all would likely do well in a sports home of some type, but most would need a more active and engaged owner to be successful as pets. This is in no way a criticism of either litter- just the reality of normal differences between breeds developed for different purposes.

Temperament evaluations aren’t a perfect science and require a lot of practice to see the more subtle differences puppies, but can be a valuable tool for breeders in the placement process. I think there is value in seeing litters of different breeds and bred for different purposes to experience a wider range of behavior.