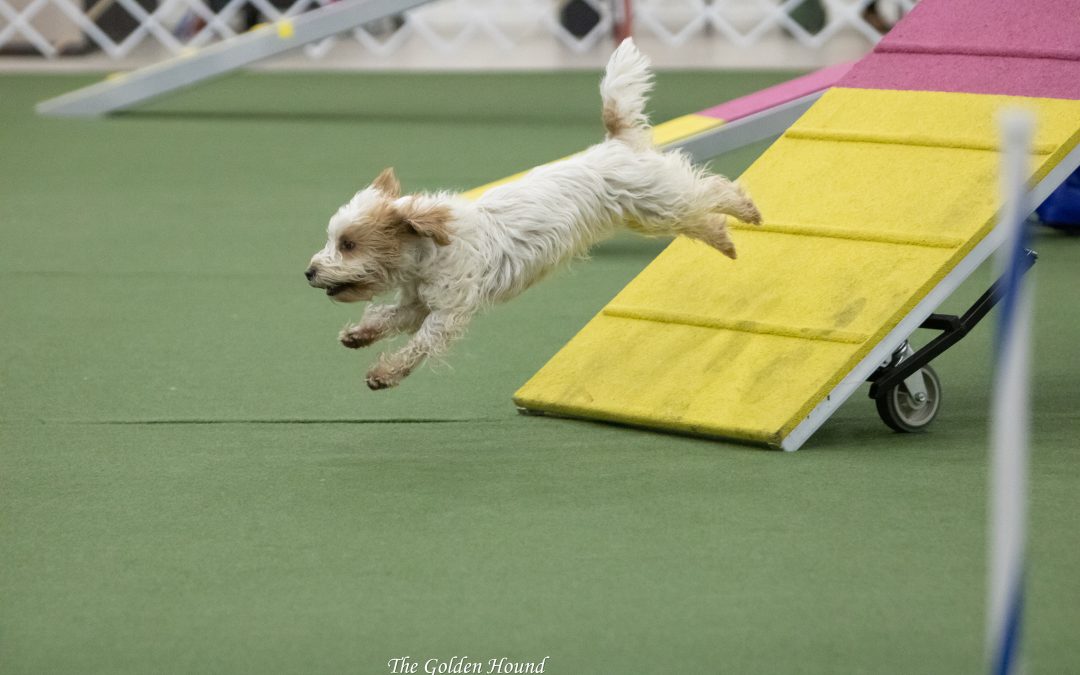 The Clever Hounds just returned from an epic road trip to the mid West that included both the PBGV and Aussie National Specialties, as well as a few all breed events in between. We traveled in the RV, so all of the dogs got to come along.

The trip started with 2 days of agility at Incredipaws in Ohio.  The Saturday trial was small dogs only, 2 trials in a day, to reduce the number of people in the building. These were small trials and it was clear that most of the people present knew each other well, but everyone was very welcoming and made sure we had a great experience.

On Sunday, we ran FAST CAT at K9 Splash Zone, which is a really nice permanent FAST CAT track. The dogs seemed to like the large catch pen and had some great runs.  This was Ginny’s first time playing FAST CAT and it took her a minute to figure out the game. On Monday we traveled to Roberts Centre for PBGV National. This is a great site that was designed to host dog shows. I really don’t understand why the club would ever go anyplace else.  We settled into our full hook up RV spot to prepare for the specialty agility trial on Tuesday, which was held in the climate controlled building on artificial turf, using high quality equipment provided by the hotel.

The club holds 2 trials in a day and 7 of the Clever Hound competed, which made for a lot of running. Ginny made her debut and did a great job, qualifying on 5 out of 6 runs.  We probably won’t do any more trials until her weave entries are more independent, so I was thrilled with how she stayed with me. Wally and Muse had fun (and some fast runs) in novice preferred.  Alice is in open, which is a tough class to Q in, but managed her first open jumpers Q.  Gromit and CC had nice standard runs on both courses. This was definitely CC’s retirement trial though. She went from pretty fast, to just making time, to not making time, to not finishing over the course of the day. The next day was another marathon for us- all 7 dogs were entered in the scent work trials. To complicate the day we woke up to several inches of snow- yes, in April, in Ohio.  We haven’t had the opportunity to do AKC scent work since last year’s national, so it was nice to have this opportunity. Silk and Elf didn’t get to play officially, but they were happy to serve as the dogs in white.

We had some nice runs with everyone. Highlights were Alice finishing her Scent Work Advanced title by getting her last buried Q and Wally finishing his Master Interior title. Thursday we woke up to no power and no water- just in time to bathe and groom the 3 girls for conformation. Luckily the emergency generator meant the bathing area had water, but it was a chilly 40 degree morning. Sorry girls!

At the regional obedience trial, Alice and Ginny both qualified in Beginner Novice, which finished Alice’s title. They also each got their second Rally Advanced leg, although Ginny may have gotten a few style points and definitely took the jump more times than planned.  The rally Qs meant that Alice and Ginny had qualified for triathlon. The girls had some class placements in conformation at the regional. I thought it was a little depressing that Ginny was the only Bred by Exhibitor bitch entered.  While it was nice to get to compete for Winners Bitch, that should (and used to be) one of the most competitive classes at the national. Without more encouragement and support for breeders, PBGVs could be in serious trouble.

After the show was the annual meeting. I was slightly encouraged that the club unanimously voted to require that PAL registered dogs will need to submit DNA proof of breed to compete at club events or be eligible for club awards. The issue of mixed breed dogs being misrepresented as PBGVs is a serious one that impacts breed preservation in many ways.

Friday was another rally and obedience trial. Alice got a bonus leg in Beginner Novice and she and Ginny finished their Rally Advanced titles. Both girls also had clear eye exams, which the PBGV Health and Rescue Foundation was kind enough to sponsor.  On Saturday morning, Ginny got her AKC Community Canine title and Alice got her Urban Canine Good Citizen.

Saturday was conformation portion of the National Specialty.  I had entered the shows this year because we had breeder judges who can see past extreme grooming, but it’s been a long time since I walked into any conformation ring expecting anything at all. To my surprise, 9 year old Muse had a fabulous day in the Veteran classes.  She was Best of Opposite Sex in Veteran Sweepstakes.  In regular classes, she was Best Veteran, got a Award of Merit (her second one at a national from veterans), and was Best of Breed Owner Handled.  This was an exciting day for Muse and for me as her breeder-owner-handler. Muse has had 3 litters in her lifetime, so she is a great example of the benefits of fitness and conditioning for breeding dogs. Sunday was a travel and errands day as we headed to St. Clairsville, OH for the national hunt test. The grounds were beautiful, with really nice facilities.  Unfortunately the snow from the previous week turned into extreme heat, which made it hard to get rabbits moving. The older girls, CC and Muse came through both days and Wally had a nice run on Tuesday. That gave triathlon Qs to CC, Wally, and Muse, while Gromit and Spice Qd in beginner triathlon.

On Wednesday we headed back to Roberts Centre for more FAST CAT. The Thursday trial was cancelled due to wind before we got to run, but the club made up the missed runs on Friday. Alice finished her DCAT title and Ginny got more into the game and finished her BCAT.

Afterwards we headed to St Louis (yup, in the wrong direction) for Aussie national.  This show is normally held at Purina Farms, but they are still closed.  Instead, the show was at National Equestrian Center, which was fine but not as ideal as Purina.

Because of conflicts with local trials, all 3 days of agility were Aussies only. Dave and I took turns running Silk and ended up with 2 QQs and several others Qs.

The next 2 days were scent work, which was open to all breeds.  With 3 judges, a huge facility, and pouring rain there were some challenges, but we had some great searches.  Silk finished her Master Exterior title and gave her first Detective run a good try. Wally finished Master Container. Elf got her overall Excellent title and Gromit got his overall Novice title. By then Alice and Ginny had come into season, so they didn’t get to play.

Overall, it was an amazing trip. The 9 dogs we ran ended up with 125 qualifying scores in 6 different sports, with 29 new titles. Everyone was ready to be home, but we all had a great time.