The Clever Hounds at the National Agility Championship 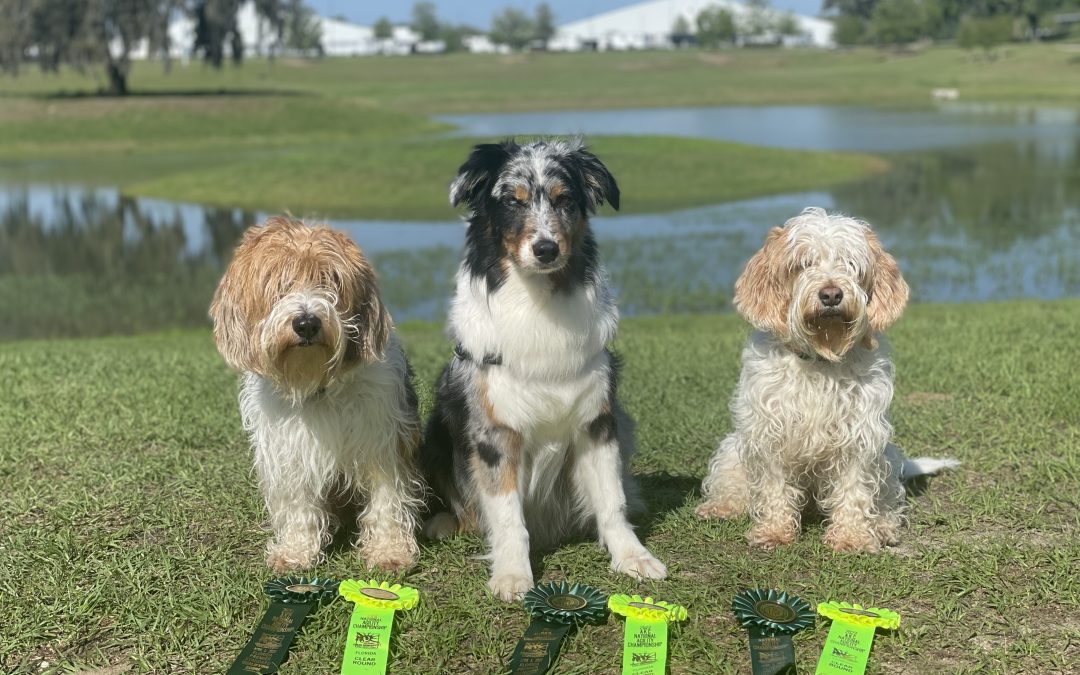 Last week, the Clever Hounds traveled to Ocala, Florida so Gromit, Spice, and Silk could compete in the AKC National Championship. Qualifying for this event required 5 double Qs and 400 points earned during a designated one year period. Points can either be MACH/ PACH points or can be earned for qualifying scores in the premier classes.  Unlike the AKC Invitational, where the top dogs of each breed are invited to compete, nationals is a much larger event with a high percentage of more typical agility breeds like Border Collies and Shelties. There were more than 1300 dogs entered, but Gromit and Spice were the only PBGVs in attendance.

Nationals were held at the World Equestrian Center, a beautiful new facility with a hotel, RV sites, really great restaurants, and shopping on site. While there was a horse show going on, the site was so large that I only saw one horse all weekend and it was really far away. A large site means that a golf cart was essential (1.8 miles each way from the RV to the crating stall) and extra time was needed for everything, but the gate stewards were pretty understanding when it took longer to get around than expected. The running surface was dirt, but it was very well maintained. It was a nice bonus that the dirt was white, so the PBGVs were not orange at the end of the weekend.

The courses this year were challenging, as they should be at a National Championship, but not as challenging as last year. On Friday, all three dogs qualified in premier standard. This was the only run of the weekend to count as a qualifying score for titling purposes.  On Saturday we did standard and jumpers. Gromit and Silk qualified in jumpers, but Spice had an off-course when I failed to account for how much wider she runs on dirt than artificial turf. She made it up by being the only one of the 3 to qualify in standard. Sunday we had an early morning hybrid run.  The girls were both clear again, but Gromit decided he was ready for his cookies one weave pole too early. Overall it was great to have some clear rounds with all of the dogs. Gromit and Silk were definitely at the slower end of their jump height, but Spice was in the middle of the pack- this felt pretty good for a PBGV running among the best agility dogs in the country.

Nationals is a really different experience than AKC’s other large event, the Invitational. Since AKC’s purpose is to promote purebred dogs, I think the Invitational has huge value, although it would be more meaningful if DNA testing were required for “purebred” dogs with unknown pedigrees.  Nationals is exciting in other ways, because it really gives a picture of the types of dogs who are most successful in the sport of agility. I say type and not breed, because one thing that becomes obvious when watching this event is that there are definitely more dogs competing that have been bred primarily for dog sports like agility, as opposed to the show ring or other work like hunting or herding. The obvious examples are the purpose bred sport mixes, Aussies with tails, and the working cockers that are gaining popularity, but I know sport specific breeding is happening in other breeds too. Many show breeders would argue that this type of division within breeds is always a bad thing, but in reality breeding to win at dog shows isn’t necessarily breeding to preserve a breed’s original type and function any more than breeding for agility is.  Honestly, I find myself a little jealous of breeders who are working with large enough gene pools to be able to have so many choices- not sure that this will ever be the case in PBGVs. I know that sport mixes are controversial in some circles, but I support anyone who is breeding responsibly and for a purpose- as long as you don’t expect me to pretend that your mixed breed dogs are PBGVs.

It was a long tiring weekend but we had a great time and a lot of fun runs.  While our dogs may not have the speed to be truly competitive at nationals, it was a great experience and we hope to be running Spice and Silk in Tulsa next year!