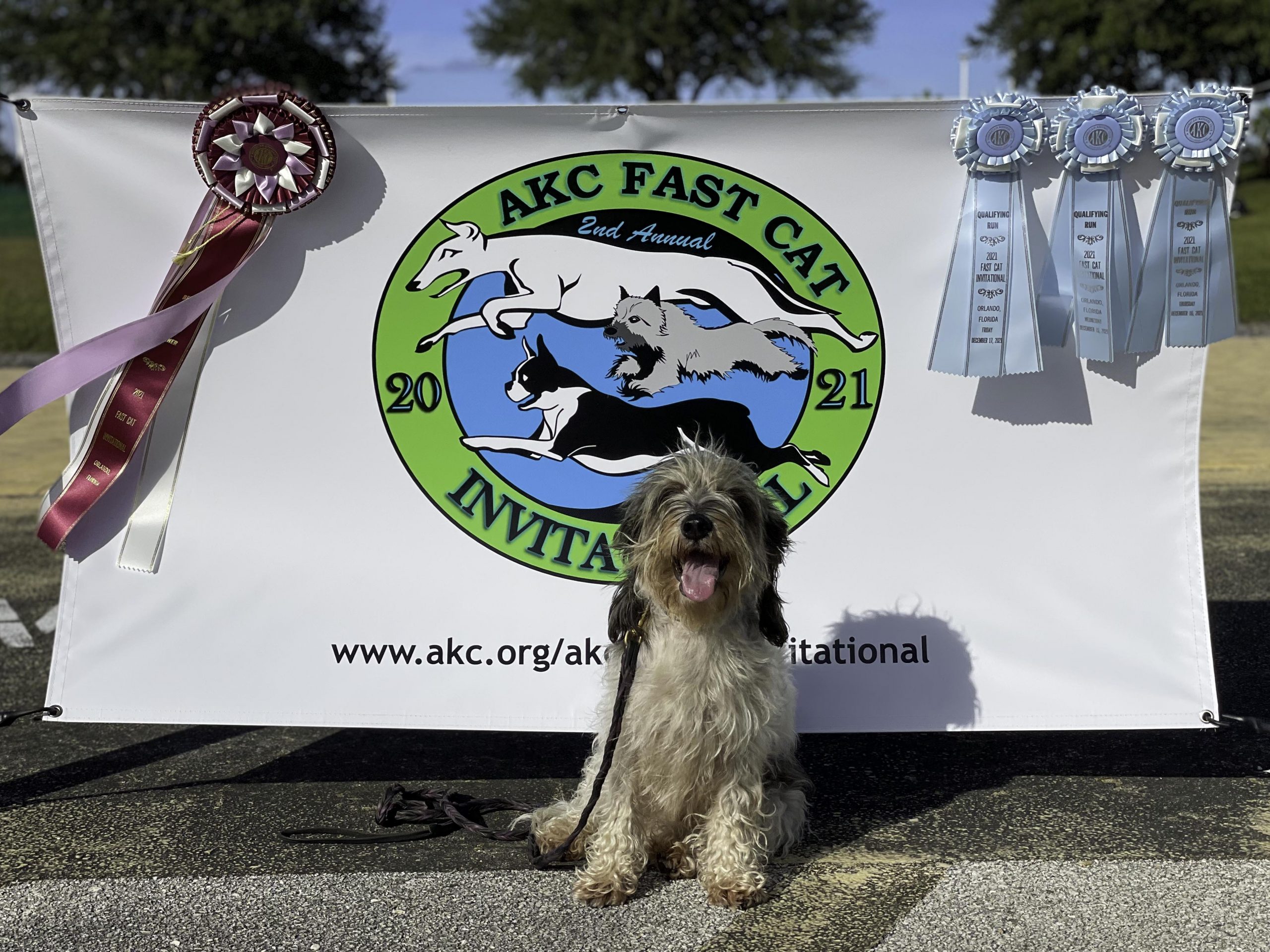 This week was the AKC National Championship Dog Show in Orlando, Florida.  The event includes the FAST CAT and Agility Invitationals, so the Clever Hounds took a road trip to represent PBGVs at these events.

We arrived Tuesday afternoon for a warm up FAST CAT run. FAST CAT is a 100 yard dash chasing a mechanical lure. They were using a drag lure, which is slightly different than the continuous loop system that is common in our area. We did the practice run to see if Alice would notice a difference, but she didn’t seem to. In fact, she was easier to catch at the end of her runs because the lure wasn’t exiting through the back of the fence.

Wednesday and Thursday were the preliminary rounds for the FAST CAT Invitational. This year the top 3 dogs of each breed were invited, instead of just one dog like they did last year.  This is a fun celebration of the variety of breeds than can participate in this sport.  Unfortunately, just like with the Agility Invitational, AKC does not require dogs registered though the PAL program to provide DNA verification of breed.  This leaves the system open for abuse and allows dishonest individuals to take opportunities away from deserving purebred dogs.  If Invitational events are meant as a recognition of the top dogs of each breed, more effort should be made to ensure that the correct dogs are invited.

PBGVs were well represented at this event by 2 very experienced dogs. The weather was hot, but the track was really nice and level with sturdy grass that held up well. After the 2 preliminary rounds, the top 2 dogs of each breed were invited to run in the finals on Friday. Since only 2 PBGVs were in attendance, both got to run in the finals. In the end, Alice came through with 3 runs over 21 MPH to win the Best of Breed rosette.

Since we had a lot of downtime on Wednesday and Thursday, I had also entered the girls in conformation. As it turned out, Alice finished her championship the weekend before we left, so she skipped the breed ring and let Ginny have all the “fun” of staying clean and presentable. There were large entries in PBGVs all week, with many nice dogs in attendance. Grooming continues to be a problem, especially the trend of removing all of the hair from the head and ears, leaving only bluntly trimmed Schnauzer-style eyebrows. As the number of PBGVs registered each year declines rapidly, it would make sense to reconsider a style of grooming that’s inaccessible to new exhibitors and those who hunt their dogs and which is likely to offend the sensibilities of the average person. If showing in the breed ring is going to be effectively mandatory for breeders who want to be treated with respect, then it should be an evaluation of breeding stock and not a grooming competition.

Stay tuned for Part 2, where I will discuss the Agility Invitational and review our videos from the event.