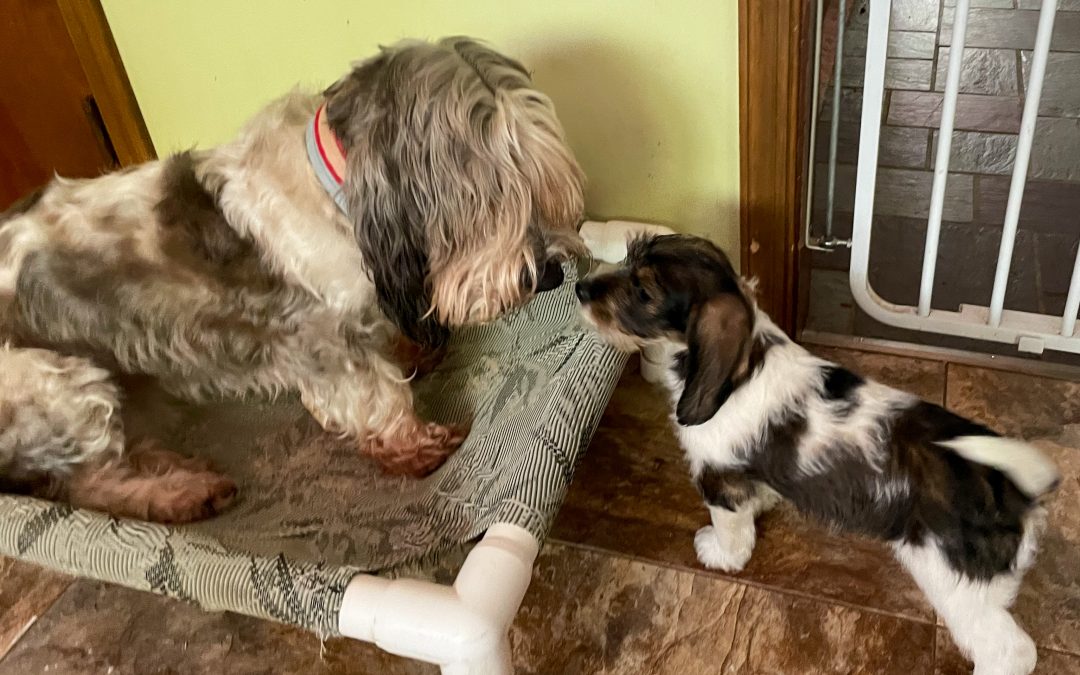 We recently added two puppies, an Aussie named Ari and a PBGV named Cara, to our multi-dog household, giving us an age range of dogs between four months and nearly 16 years. Managing everyone’s needs, especially the puppies and the geriatric dogs has brought up some specific challenges that I wanted to share, since this is a scenario that happens in many households.

As a dog trainer, I frequently work with owners who recently added a puppy to their household. One of the common problems that arises is conflict between an older dog who was already in residence and the new addition. It’s not unusual for families to get a puppy when they realize that an older dog is in decline, either out of desire to avoid being without a dog in the household while waiting for a puppy or because of the hope that the older dog will be rejuvenated by having a new friend.  Sometimes people expect that that the older dog will even help raise the new puppy. Unfortunately, it’s very rare for an older dog to be entirely pleased to have a rambunctious puppy in the house and elderly dogs often need a lot of support in navigating this new relationship. As an adult human who has always felt very uncomfortable around small children, I often find myself feeling a lot of empathy for these older dogs.

We have five dogs in our home who are over the age of ten, which would qualify them as senior dogs by most standards.  Wally, Muse, and C.C. are still in really good shape and are able to handle themselves well around the puppies. Muse really likes them and Wally and C.C. don’t, but they are able to communicate this in a way that no one is likely to be injured. Maya and Juno are much older and more frail, so we manage interactions a lot more carefully.

Maya is nearly 16.  She is pretty mobile, but can’t see or hear well and gets confused easily (except about when dinner should be served, but that’s an entirely different topic….). Maya has always loved puppies and still does, but it’s important to be careful that she doesn’t get knocked over or accidentally injured. I’m particularly careful about interactions between Maya and Ari, since Ari is already bigger than her.

Juno the GBGV has very different challenges. She’s 14, so not quite as old as Maya, but she’s a bigger dog and has had some major health challenges throughout her life. Juno has hip dysplasia that is managed by medication, but she definitely has some arthritis pain. She also doesn’t particularly like people or other dogs, especially puppies. Our adult dogs have always known to give her space and she is never out with the most active dogs, but I know that I can’t trust her not to hurt a puppy.  This means that interactions have to be limited and very careful. Pain is likely a factor in Juno’s lack of tolerance, but temperament is also part of the challenge.

One thing that has always surprised me when working with dog owners is the number of multiple dog households where there is no way to separate the dogs from each other without causing extreme stress. The use of crates is not nearly as universal as we might think and many people are unwilling or unable to use gates or closed doors to restrict a dog’s access to portions of the home or the other dogs living in it. This is problematic for a lot of reasons, but one of them is that an older dog has no way to escape from a young dog who may have a lot more energy and stamina.  Often older dogs resort to aggression out of exhaustion when they can’t get a break. Expecting dogs to work it out among themselves is not fair- we were the ones who chose the get a puppy, not the senior dog. In our household introductions always happen in protected contact with a barrier between dogs until everyone is calm. We always have the option of separating anyone who needs a break for any reason. Right now, we have gated communities (exercise pens) set up for each puppy and another for keeping the senior dogs safe when everyone is wound up. Yes, the family room looks like a kennel, but we would rather have a peaceable home than one featured on HGTV.

One final challenge we have encountered is house training puppies while also managing some incontinence with the two oldest girls. This is ongoing and in the case of the seniors probably not going to improve, but I think I’m getting better at getting everyone out the door (and reminding Maya where the door is…..) really quickly before the first cup of coffee in the morning.  Or maybe I’m just grateful that we don’t have carpeting.  Either way, I am glad the older girls are still with us and that we have two adorable puppies to enjoy.