The Road to Gromit’s MACH 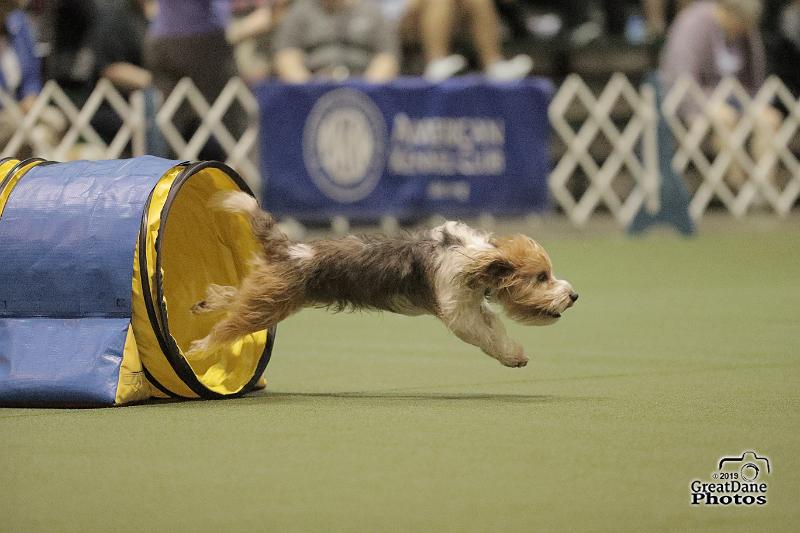 Last weekend, Gromit finished his Master Agility Championship. The requirements for this title are 20 double Qs and 750 speed points. Double Qs are earned by having perfect runs in Master Standard and Jumpers on the same day. Speed points are earned for each full second under course time.

Gromit hasn’t been the easiest dog I’ve ever run.  In fact, he still isn’t, which made his MACH an unlikely surprise. I almost quit a few times, but over the past 2 years a few changes made a big difference for us.

First, let’s talk about the things that make Gromit a good agility dog.  He’s extremely fit and athletic for his breed. At 13.88 inches tall, he’s one of the bigger dogs in his jump height, although at 26 pounds he is also one of the heaviest. Gromit has been raised in a consistent handling program and has a solid understanding of his verbal cues when he is engaged in work. He is also very food motivated, which helps a lot because he is doing agility for the cookies.

Engagement and motivation have been Gromit’s big challenge.  He has never been very fast in practice, but can be really fast in trials, just not all of the time.  This makes for challenges in coming up with a handling plan.  At this point in his career, Gromit has settled into a routine of starting slow and then speeding up dramatically at about obstacle 15, you know, when the cookies are getting closer.  Initially he would speed up and totally lose control.  You would see his ears pin back and tail carriage change about 1-2 obstacles before he took off, but good luck trying to prevent this from happening.  Now, I have a fighting chance of finishing the course but technical endings are not our strong point.

So, at this point 2 years ago, Gromit was qualifying maybe once a month, usually in jumpers where we only got 1-2 points.  I was also starting to see significant behavior problems around the house when my girls were in season. Training or competing was not even a possibility for Gromit when the girls were in season- just getting through daily life was a big struggle.  I knew I wanted to have the option of using Gromit in my breeding program at some point, but he’s too related to my girls right now.  In 2019 I decided to freeze semen from both of my boys and have them neutered.  This decision has made things much better around the house, but also saved Gromit’s agility career.  Neutering isn’t a popular choice in the dog sports community, but any physical effects from lack of testosterone have been made up for in increased focus, lower stress, and the fact that we can get to the ring without tooth chattering and picking fights with other male dogs.

Around this time, AKC changed the rules to allow head halters on show grounds.  I started using one to manage Gromit’s behavior outside the ring, but abandoned this plan when he started spending 45 seconds rubbing his face in the first tunnel of every course.

In early 2020, another rule change did help us a lot- fix and go.  All along Gromit had made it his mission to personally thank all of the ring crew volunteers, wasting tons of time and causing refusals.  The first time I was able to remove him from a volunteer’s lap and bring him back to work was a surprise to him.  I did  it twice and now he rarely visits, although if you watch his MACH video closely you will see him think about it twice.

So after making these changes, Gromit came back from our COVID- imposed break from agility and started qualifying.  Not always, and not necessarily flawlessly, but regularly. By December we had our double Qs and just needed points.  This is less pressure because you don’t need a perfect day, but also tempts you to push for speed, which doesn’t work for keeping Gromit’s arousal in check.  Eventually we found the sweet spot and points added up too.

I had planned Gromit’s MACH to be his retirement from agility, but based on the last 6 months I don’t think he is ready to quit yet.  He’s a 2 run a day kind of guy and I better have the good cookies, but we’ll keep playing as long as he wants to.  Next stop for Gromit and The Clever Hounds?  The AKC National Agility Championship.